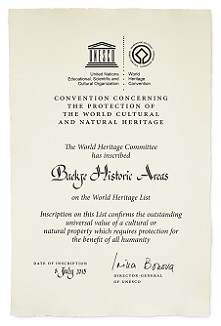 The Ancient Tombs in Songsan-ri, Gongju are royal tombs built in the Ungjin (475~538) period of Baekje. The site gained recognition for its value as proof of cultural interchanges with other ancient kingdoms in East Asia and the excellence of Baekje culture, based on the tomb structure and layout as well as the artifacts that were excavated from the tombs.

The Ancient Tombs in Songsan-ri, designated as Historic Site No. 13, retain the traces of the royal family that ruled over Baekje during the Ungjin period (475~538). Located in the southern hillsides near the Geumgang River, the site originally contained dozens of tombs, according to a survey carried out during the Japanese occupation period, but there only remain seven tombs including the Tomb of King Muryeong.

Tombs No. 1 to 5 each feature a stone chamber with a tunnel entrance, a type of tomb that was commonly built in Baekje, while Tomb No. 1 and the Tomb of King Muryeong were built as brick chambers, which were popular in China at the time.

The Tomb of King Muryeong

The Tomb of King Muryeong is where Muryeong, the 25th king of Baekje, and his queen have been laid to rest. This is the sole royal tomb built during the Three Kingdoms Period where the identities of the buried persons are accurately known. The tomb was discovered inadvertently during the drainage work on tombs No. 5 and 6 in 1971, around 1,500 years after it was originally constructed. Because it was discovered with the original structures completely intact, it provided a great deal of resources for research on not only the history of Baekje but ancient history. The tomb also yielded a memorial stone revealing that the deceased buried in the tomb was King Muryeong, which astonished the world.

Artifacts Excavated from the Tomb of King Muryeong

The Tomb of King Muryeong was well-preserved in its original state, with a wealth of artifacts found inside. The number of artifacts uncovered amount to about 4,600, and 12 of them were designated as national treasures. A broad range of items was uncovered including the memorial stone revealing the identity of the person buried inside as King Muryeong as well as gold diadem ornaments, earrings, necklaces, bracelets, swords with decorative rings, bronze mirrors, stone guardian figures, pottery, glass beads and clothes iron.

These artifacts not only provide a glimpse into the brilliant culture of Baekje but also serve as evidence of the international exchanges of Baekje.