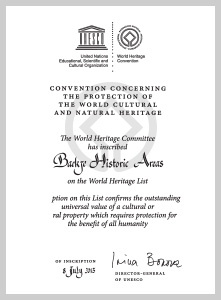 Gongsanseong Fortress in Gongju gained recognition for its value as an ancient fortress of Baekje that was built during the Ungjin period (475~538). The construction technique that involved compacting fine soil and sandy soil alternately and the building site, where ditches were created for the erection of columns and fine sand was applied to the walls, serve as valuable sources of information that provides insight into Baekje’s civil engineering technology, which underwent advancement through cultural exchanges with ancient China and Japan.

Long ago, Gongju was called Gomanaru as well as Ungjin, based on the Chinese characters. Ungjin became the capital of Baekje when Hanseong (present-day Seoul) fell at the hands of Goguryeo.

The fortress of the capital of Baekje during the Ungjin period (475~538) was called Ungjinseong, which is now known as Gongsanseong Fortress.

Baekje’s royal palace site is situated on a flat piece of land in front of Ssangsujeong Pavilion found at the peak in the western part of Gongsanseong Fortress. It overlooks the city of Gongju as well as the Ancient Tombs in Songsan-ri. A survey of the site revealed a building site where ditches were created for the erection of columns and fine sand was applied to the walls, another building site where the bottom of the columns were driven into the ground for building erection, a pond and storage facilities such as a wooden storage.

Facilities Associated with the Royal Palace of Baekje

The site situated northwest of Gongsanseong Fortress on a large piece of land adjacent to the Geunggang River is speculated to have contained a wide variety of buildings associated with the royal palace.

Civil engineering work was performed to flatten the valley area, and embankments were constructed around the roads built in the north-south and west-east directions to create a terrace, where buildings were erected based on a carefully planned layout.

A survey revealed around 80 building sites as well as roads, drainage channels, reservoir facilities, a pond, wooden warehouses and more.